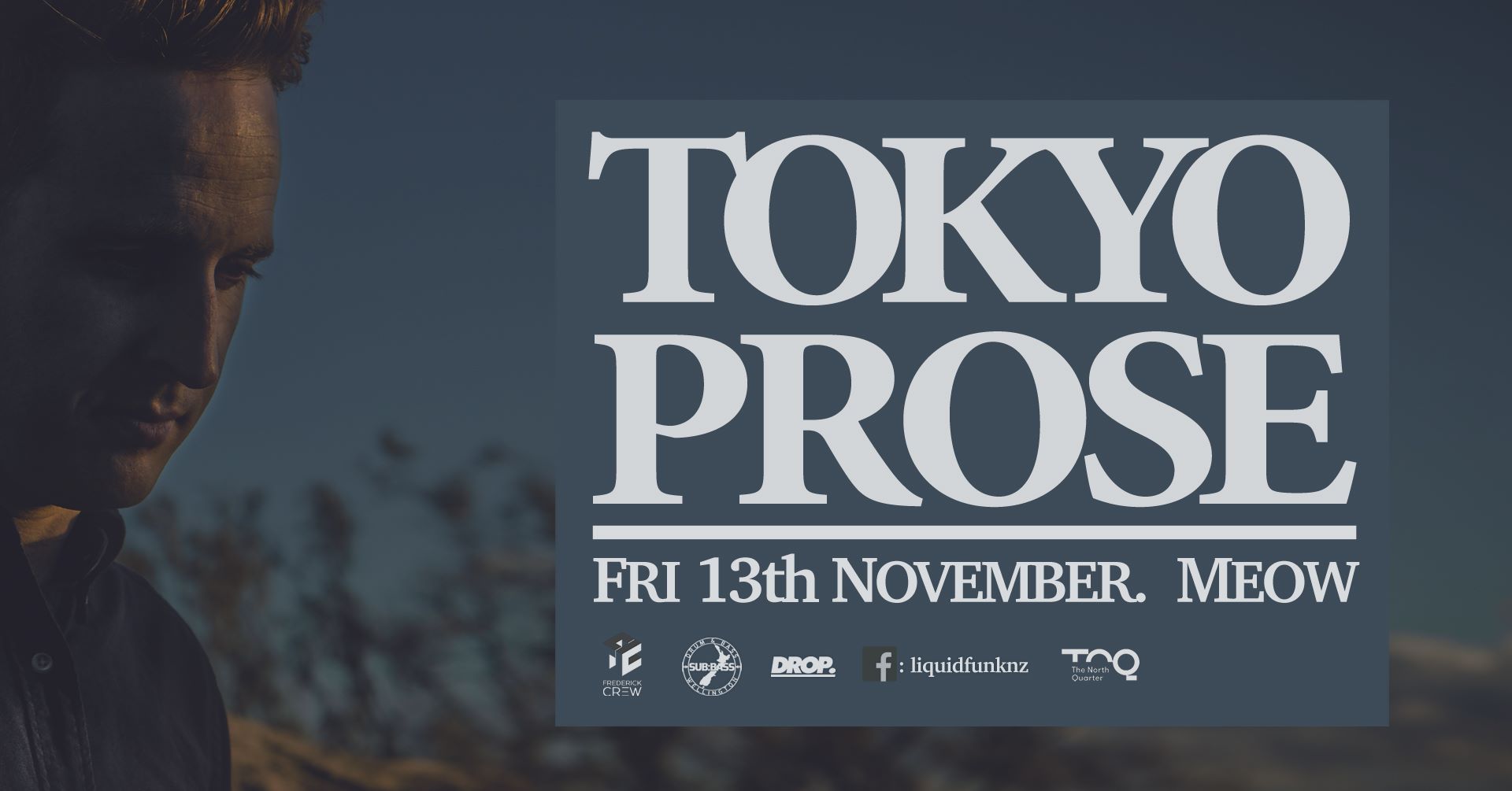 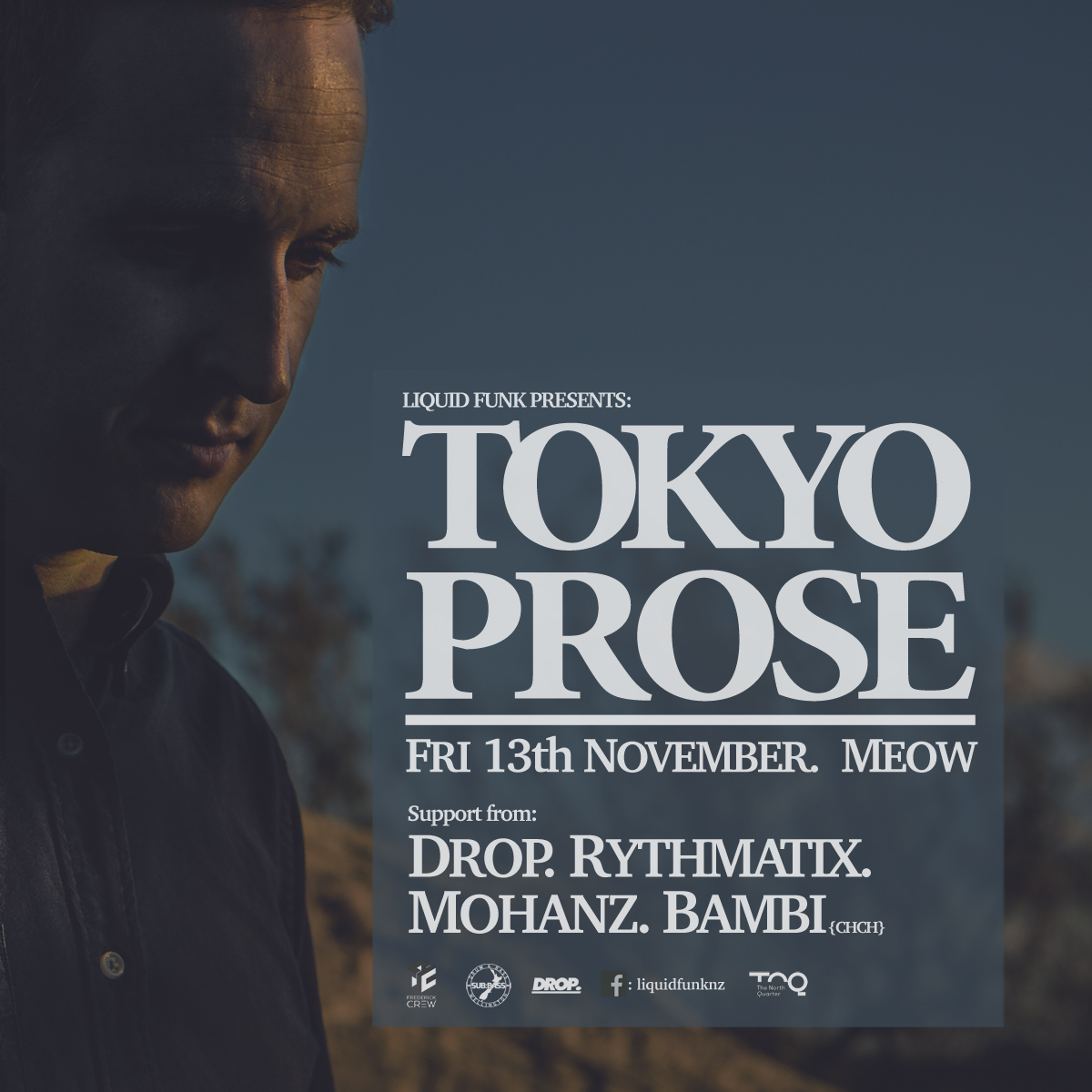 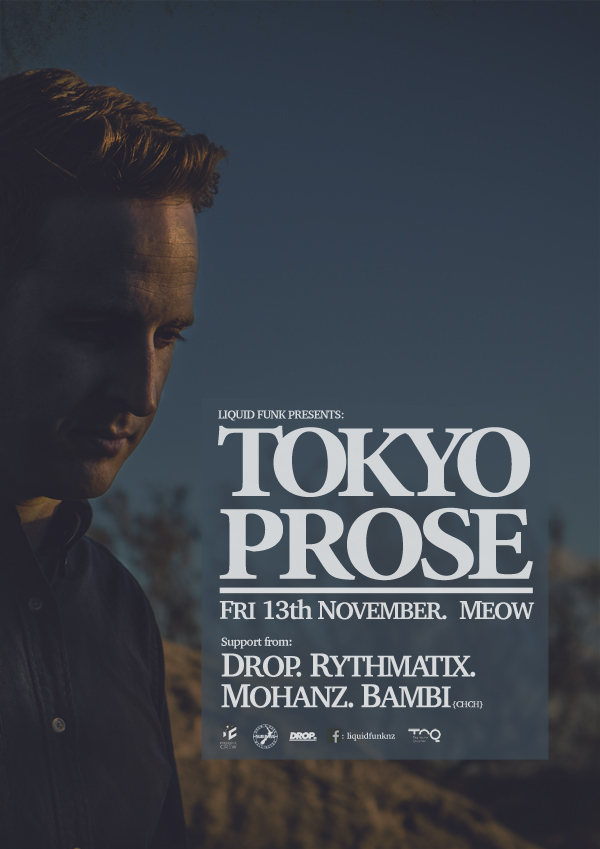 At long last Liquid Funk bring back Aotearoa’s finest creator of soulful, musical, liquid drum n bass, the legendary Tokyo Prose. Those of you that have witnessed one of Tokyo Prose’s trips to Wellington over the last five years, including his sold-out most recent gig in 2018, will know what a treat our ears are in for. Supported by the Liquid Funk crew, and making the move from the intimate environs of Laundry to the bigger dance floor of Meow, this will be very very special.

Sam Reed aka Tokyo Prose is the leading producer of liquid drum & bass in NZ. His music has been released on Soul:r, Samurai Music, Hospital Records and his most recent album “WildGrace” was released on Lenzman’s emergent The North Quarter label. His music is regularly supported by many of the scenes biggest names including Calibre, Lenzman, Hybrid Minds,LSB, DJ Marky, London Elektricity and many more.

For a career of over ten years’, Tokyo Prose has a succinct and carefully managed back-catalogue of music. He has a deliberate, restrained, and soulful production style with a firm focus on musicality and groove.Tokyo Prose started his career on Samurai Music with 2011’s 'Introducing Tokyo Prose’ EP that featured the break out tune "Saving Grace”. In the same year, Tokyo Prose with Fis went onto launch the Samurai Horo label including the track “The Truths” which featured on Forrest Swords’ 2018 DJ Kicks compilation.

In 2014 Tokyo Prose released his debut album ‘Presence’ on Samurai Music. ‘Presence’ marked the culmination of his musical exploration and evolution up until that point-encapsulating the soulful, emotive vibrancy of the Tokyo Prose sound, now fully formed and refined. The album included several features with DRS, Riya and Fox on vocals and Lenzman, Synkro and LSB on co-production.

Soon after saw his first feature on Marcus Intalex's hugely respected labelSoul:R with 'TellMe', on the 5th edition of the popular Fourfit series.Tokyo Prose’s sophomore album on The North Quarter 'Wild Grace' delivered a masterclass in emotive musical storytelling. The project features some of his most sought-after works including the popular ‘Innate Motion’, ‘Trick of the Light’ and ‘Brilliant Corners’. ‘InnateMotion’ was also featured in Calibre’s BBC Essential Mix.

Your ticket will be emailed to the address you have entered & also available for download from your account. If for any reason you do not receive your ticket please contact us . All event information will be on your ticket. All tickets are non refundable. Please have your ticket printed out or on your phone ready to be scanned at the door. Any issues or concerns please contact us on our contact page or phone: 04 282 1086.